Carole helped me cut through the keto-info-overload! 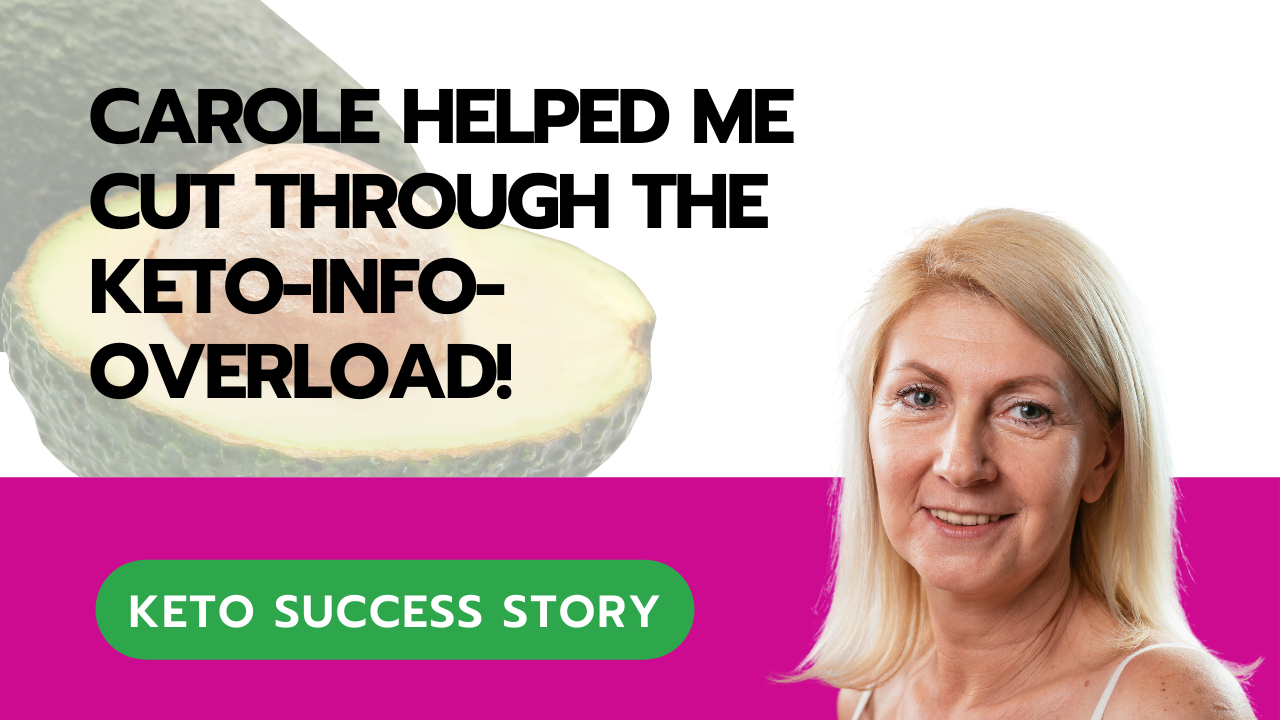 One of the biggest barriers to keto success is the sheer amount of information (and misinformation) out there.

Trying to make any sense out of all the articles, websites, gurus, and social media posts can be absolutely exhausting. Especially since they are all telling you completely different information!

You know what I’m talking about, right?

I bet just on your way here, you waded through a sea of keto “stuff”.

The thing is, it doesn’t have to be so confusing.

And you don’t have to try to figure this out all on your own!

I can help you. Just like I helped Angie.

I helped Angie cut through the keto information overload and guided her through to keto success!

This is her story…

Angie is a 58-year-old woman from Canada. All her life she was told that she was just a big kid and at the young age of just 8 or 9 her mother put her on her first grapefruit diet.

There was some trauma in her past that Angie associates with her weight gain but the gaining continued and eventually she hit about 320 lbs. At this point, in her mid-20s, Angie decided to have weight loss surgery which helped her get down to 180 lbs.

However, fast-forward to her late 50s and the weight is starting to come back on.

From her lowest point, she had gained nearly 100 lbs.

Angie didn’t want to go back.

She wanted to try keto for weight loss and to get her energy back.

Angie does a lot of walking for work, and she needed (and wanted) to be able to be active, stay healthy, and do what matters in her life. Her plan was to lose about 50 – 60 lbs and then figure out what’s next in her health journey.

She knew that Atkins as a low-carb diet had always worked well for her but when it came to keto, she was completely out of her depth. The amount of conflicting information was super overwhelming and she just couldn’t figure out how to do it on her own.

Angie is a very independent person and is somebody that would normally just do things on her own. But when it came to navigating keto, she really needed some help to get it to work for her.

When it came to looking for a keto coach, Angie had a few things to consider…

She wanted someone who knew what they were doing!

But beyond that, she really wanted someone who could keep her accountable…she had a habit of drinking lots of cola and wanted the accountability to give that up.

Angie also knows that she doesn’t do well with things that are too restrictive.

So when we started working together, that was something I was mindful of. We focused a lot on the psychology side of keto so that she doesn’t lean into the idea of restriction but instead feels more empowered.

Angie is also someone who needs routine and proven systems. The draw for her was my structured step-by-step plan that not only gave clarity but she could easily follow it despite having a high-stress job.

After just two months of working together Angie’s transformation has been a weight loss of 14 lbs, losing about 2 inches off almost every part of her body!

Another amazing result for Angie was the disappearance of the constant stomach upsets that had resulted from her weight loss surgery. Not only are they totally gone but she also has loads more energy and is walking freer with more pep in her step!

Perhaps the sweet cherry on top of the keto cake for Angie was that her partner followed the plan along with her and it brought them closer together and improved their communication.

I asked Angie what working with me brought her that she couldn’t have found on her own.

She told me the most important parts for her were the simple step-by-step approach and the clarity I provided. Having an expert to guide her along a path that had previously been so cluttered with confusion was priceless!