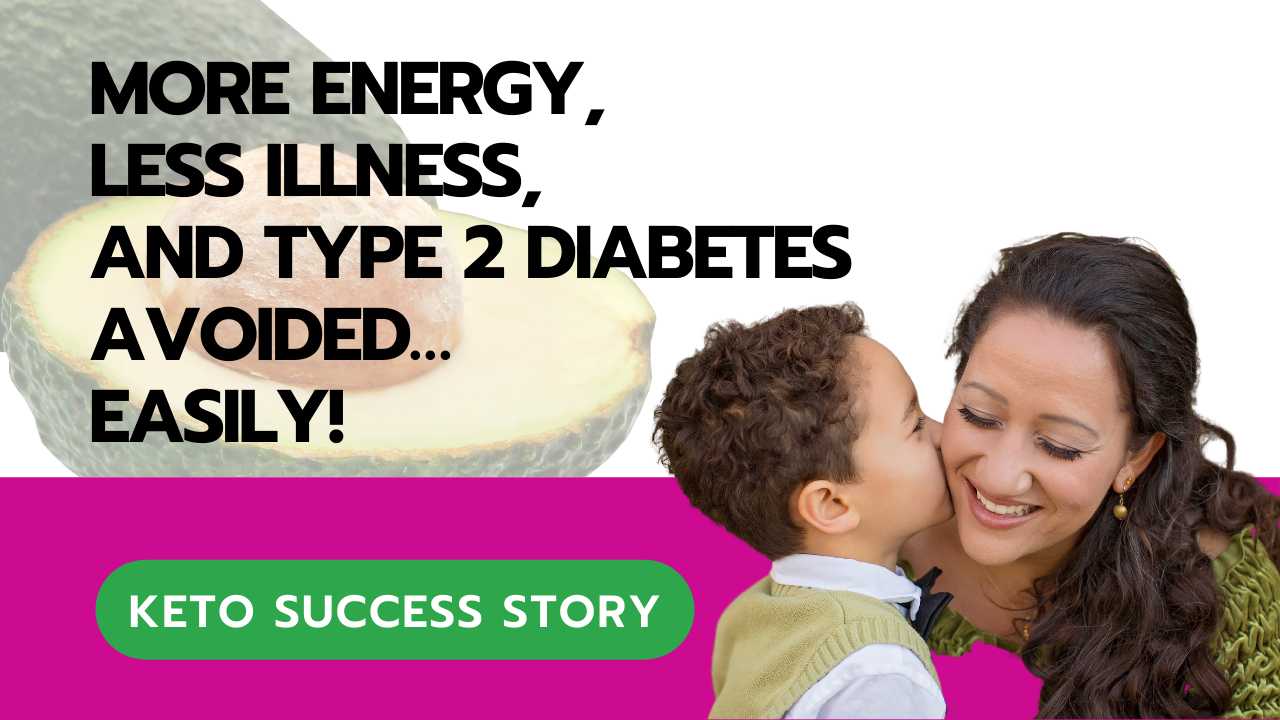 Stephanie is a 46-year-old mom who lives on the East Coast, in the Northeast. Like many of my clients, she is a successful woman who wears a lot of hats in her family. She works as an electrical engineer and she is also the primary cook.

So not only is she bringing home the bacon, she’s frying it up in a pan too!

Before she worked with me, she had tried keto on her own and was only able to lose about 30lbs but then she fell off track and just couldn’t get back on it.

Again, such a familiar story for so many of my clients.

Even though Stephanie felt so much better on keto, once she went off the rails, no matter what she did, she just couldn’t find the motivation to stick with it or to get back on track once she fell off.

You see, the reason that she stopped doing keto or found it so hard was because it just stopped working.

She hit a wall, and couldn’t seem to lose any more.

She got so frustrated that she gave up.

In addition to weight loss, Stephanie had other motivators that made her seek me out, too…

Stephanie wanted to avoid Type 2 diabetes that both of her parents had died from.

In fact, Type 2 diabetes runs rampant in her family. Her mother died three years ago from diabetes, then her dad had lost his toes to diabetes and then died five years ago. Her uncle has also lost a leg to the disease.

Even though Stephanie did not want to go down that same path, she had had gestational diabetes when she was pregnant with her daughter. So she knew that if she didn’t get help, she was very likely headed towards Type 2, too.

So when Stephanie came to me, her goal was to lose weight and more importantly, to avoid the same fate that had taken her parents too early.

On top of that, she also wanted to be a healthy role model for her kids and her 50th birthday was on the horizon.

She’s planning a big trip to Hawaii for her birthday, calling it Hawaii Five-O for her 50th birthday and she wanted to be able to enjoy it. She just wants to look and feel confident and have lots of energy to do whatever she wants on that vacation.

So fast forward, two months after working with me…

The number one thing that she got from working with me was way more energy. The difference was so stark that now when she wakes up, she’s alert whereas in the past, she had to wake up slowly, have a cup of coffee and kind of get herself going before she really felt awake.  She never thought she’d learn how to do easy keto for energy.

Now she just wakes up and is go-go-go all day long. She’s sleeping better, feels better, and has more energy to be able to keep up with her kids.

She’s also noticed she doesn’t get sick anymore, which is a very common result for my clients who I’ve helped learn how to do easy keto for more energy.

There’s a couple of things about keto that actually help our immune system work better.

One is upregulating our vitamin D into the form we need for our immune function. Another thing is it’s immune-modulating, in that it actually helps our immune system work the way that it should. That’s how easy keto for more energy works!

Stephanie thought it was an odd result and wasn’t sure if it was connected to doing keto or not. But as I told her, it’s actually a very common result because on keto, people’s immune system works much better and the result is that they don’t get sick.

Going through the easy keto for more energy program has also given Stephanie the motivation and confidence to have conversations with her family about healthier eating and getting some exercise.

She’s also noticed that what she’s been doing has been rubbing off on her husband because he’s now starting to watch what he’s eating, too.

One of the things she liked the most about my approach was how I explain all the reasons behind every recommendation and strategy.

I explain everything that I’m having my clients do and why it works.

Sure, you can Google things but they don’t teach you any of that. There are so many keto coaches and even keto health care practitioners out there that really don’t understand all of the “why” behind it.

Having that reasoning can be the missing link for success on keto.

I just have a natural ability to be able to teach things to people in a way that’s easy for people to understand. Most people just don’t have the knowledge, the skill, or the care to do it.

One of the keys to my easy keto for more energy program that made it different to all the other keto programs out there and what made it so doable for Stephanie was the easy meals.

She said before, when she was trying keto on her own she came across all these complicated keto recipes.

When you’re a busy mom, you’ve worked all day long and you’re just trying to put meals on the table for your family, the last thing you want to do is try to figure out some kind of a complicated recipe with a crazy long list of ingredients you don’t have.

My rule is stick with meals that take 5 to 10 minutes to make. You can have dinner on the table when you’re super hungry and the kids are screaming and you need a meal fast.

“Easy” is one of the foundations of my approach to keto and what I teach and how I teach it.

As Stephanie also found when it came to eating out in restaurants.

If she found herself out with family or friends, and there weren’t any good options on the menu that she wanted to eat, she realized that she didn’t need to eat.

She wasn’t that hungry or being plagued by cravings. She found it easy to wait until she got home to eat and was totally fine and happy with it.

That’s one of the nice things about keto, that you just have a really low appetite, and the way that I teach keto, you end up getting rid of your cravings for carbs as well.

More improvements Stephanie noticed were that she used to breathe really hard when walking up and down the stairs and now she doesn’t breathe hard at all.

She says it’s those little things that are just a part of life that have changed, like being able to lay on her back and just feel comfortable. Whereas before, she felt kind of smothered and struggled to breathe when lying on her back.

One more thing she noticed too, was that she just has more time…

“I’m just not spending so much time eating! I’ve got a lot more time in my day. From the increased energy to spending less time preparing and thinking about food and eating, it’s just given me a better quality of life and a lot of time back in my life.”

I asked Stephanie how her eating has changed things with her family and how they’re taking things with her improving her health. She says that now when she cooks dinner, all she makes is protein and some vegetables and her family doesn’t even care, they don’t even notice that the meals are healthy!

She’s been able to change for the better what her whole family is eating and they’re all on board with it.

Working with me led to three realizations for Stephanie:

Maybe like Stephanie, you’ve tried keto on your own and had a little weight loss success but then hit that wall. Or maybe you’re on a path toward Type 2 diabetes and need help to change your fate.

Perhaps you need someone who knows all the inside reasons WHY keto works to help it all make sense for you.

Whatever your motivation, contact Carole today if you’d like to learn easy keto for energy and see if you can work together.

Other Success Stories You May Enjoy: