How to Stick with Keto When You’ve Failed Everything Else 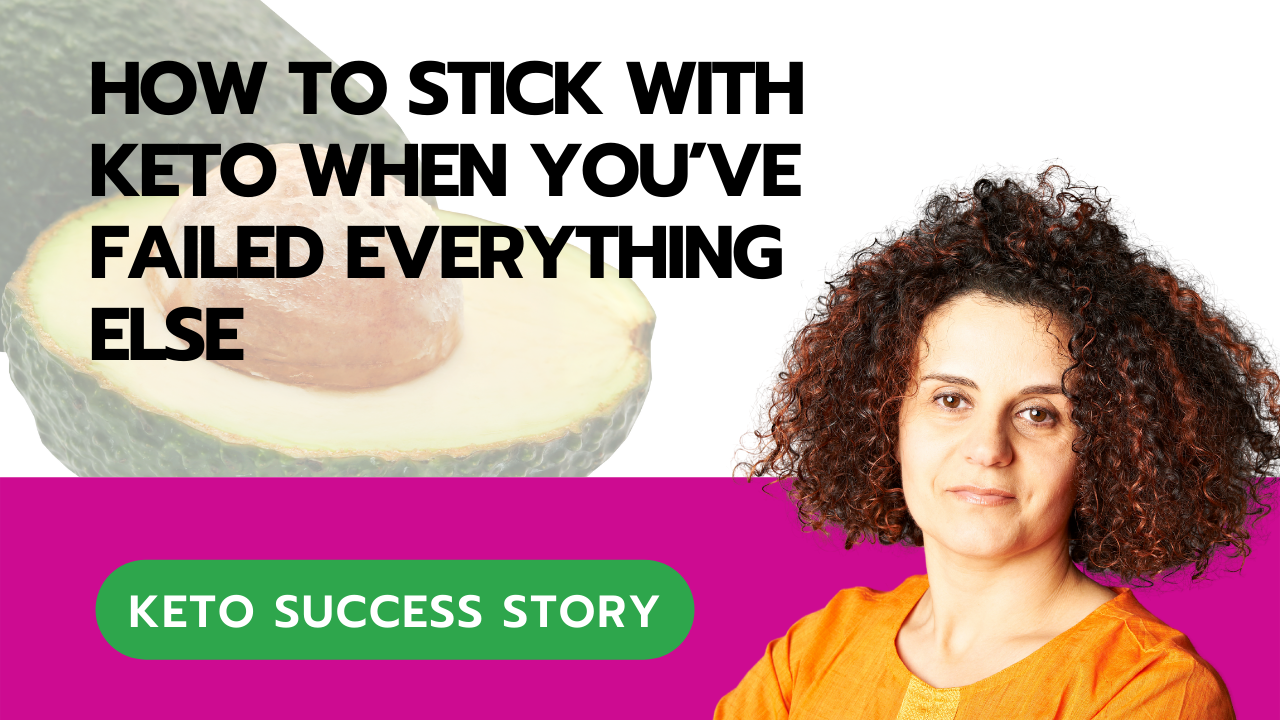 How to Stick with Keto When You’ve Failed Everything Else – Keto Success Stories.

Leann is a 50-year-old woman who runs her own coaching business. She has two sons and an active husband. Leann was the only one in her family that was struggling with being overweight.

Since then, Leann has done a lot, A LOT, of diets. But no matter what she tried, she just seemed to be gaining more. Then two years ago, a friend of hers lost 40lbs and was able to sustain it. This spurred her on a little further.

So she joined a Facebook group that promoted keto-style eating where you ate one meal a day, also known as OMAD.

The group basically told people to just eat one big giant salad a day. She was following it, but the results just weren’t very dramatic.

Plus who wants to just eat ONLY salad forever??

The tipping point that made Leann reach out and get professional help and coaching support for weight loss was an incident with a friend.

This friend, who was well-meaning, but also a little clueless, texted her out of the blue saying, “Oh, my God, I know you want to lose weight, you should check out this Optavia program!”

Leann looked it up and it was just processed and packaged food that looked terrible. But Leann just felt completely humiliated that her friend had texted her about a weight loss program.

The number one driver of why she wanted to lose weight was that she would wake up every single morning and feel so overwhelmed because she had 50lbs to lose. It just seemed impossible.

She was tired of feeling out of breath just from walking up the stairs. She had gained so much that she just couldn’t hide it anymore and she had lost all of her self-confidence.

Nothing in her closet looked good on her and she didn’t want to be seen out in public. She went on a girl’s trip during spring break and she didn’t have anything to wear that she felt comfortable in the entire trip.

She also wanted to be able to be active with her family because they go golfing and biking. She felt like she couldn’t keep up and like she didn’t fit in with her own family.

Her family history was also a motivating factor. Her mom is a smoker, an alcoholic, and overweight, and Leann just really wants to avoid the same poor health that her mother is in.

Leann reached out for help because what she really needed was knowledge. She needed to know how to do keto in the most effective way and how to make it work for her. She wanted to know how to stick with keto When you’ve failed everything else.

Leann always had trouble with following up and staying consistent. She could go two or three days following something, but then would lose the commitment to it.

Another big challenge for Leann was that she had a lot of snacks in the house with two teens. Plus, when she’s on a diet, she really feels like she misses out on certain foods like chips and salsa, alcohol, and wine.

A glass of wine was her relaxation ritual every night, like a lot of women I work with. She had a long list of all kinds of things that she felt were going to be a struggle for her to give up.

But, she made it!

Fast forward to Leann completing our Fast Track program and she’d lost 15lbs and 3 inches off of her waist and 5 inches off of her hips! Our program helped her learn how to stick with keto When you’ve failed everything else.

Can you imagine how loose your pants would be if you’d lost that much around those areas?

She’s gone down about one and a half sizes so she went from an extra-large to a very loose, large.

She has so much more energy. Her breathing is so much easier. She can walk up the stairs without feeling winded and her confidence has improved dramatically. She’s also thinking and feeling better.

Her clothes fit so much better again and she’s been able to be active with her family. She’s noticing how much smaller her stomach feels which is just more comfortable because she’s feeling less bloated and discomfort.

It was something she doubted highly, that she could be craving-free, so this was a really special result for her.

Leann has actually been with us for six months now in our Crew, which is our long-term annual membership that supports people on getting all the way to their weight loss goal. It’s all about maintaining the lifestyle to continue on their healing journey. Like many of our Crew, she has learned how to stick with keto When you’ve failed everything else.

With this support, Leann has made really great strides in advocating for herself. She’s had a lot of awareness and breakthroughs. The snacks she kept in the house for the kids, she realized that they weren’t the ones attached to them and that it was more about her not wanting to let go of those foods in the house.

Leann’s progress is not only physical but she’s made a lot of mental progress as well, in putting herself first and prioritizing her health.

She said one of the big reasons why this was so effective for her was that “Carole won’t take crap from you!”

She says I was tough on her in a really good way and it was something she really needed. She added, “I’m really thankful. I thank God that I found you.”

What are Leann’s 3 lessons?

When that friend sent her the other diet program, she was so discouraged and she had a lot of fear that she wasn’t going to complete my program. She really did think that she would fail.

But here she is nearly a year later and she’s still going strong!

As Leann found out, freeing yourself from cravings and learning about your own food hang-ups can be the key to long-term weight loss success.

If you feel like Leann, like you can’t keep up with your active family, or you struggle to commit to a healthy diet, then contact Carole and see if she can help you get on the right keto path. Start your keto journey with us so you too can learn how to stick with keto When you’ve failed everything else.

Other Success Stories You May Enjoy