Support to Succeed With Keto 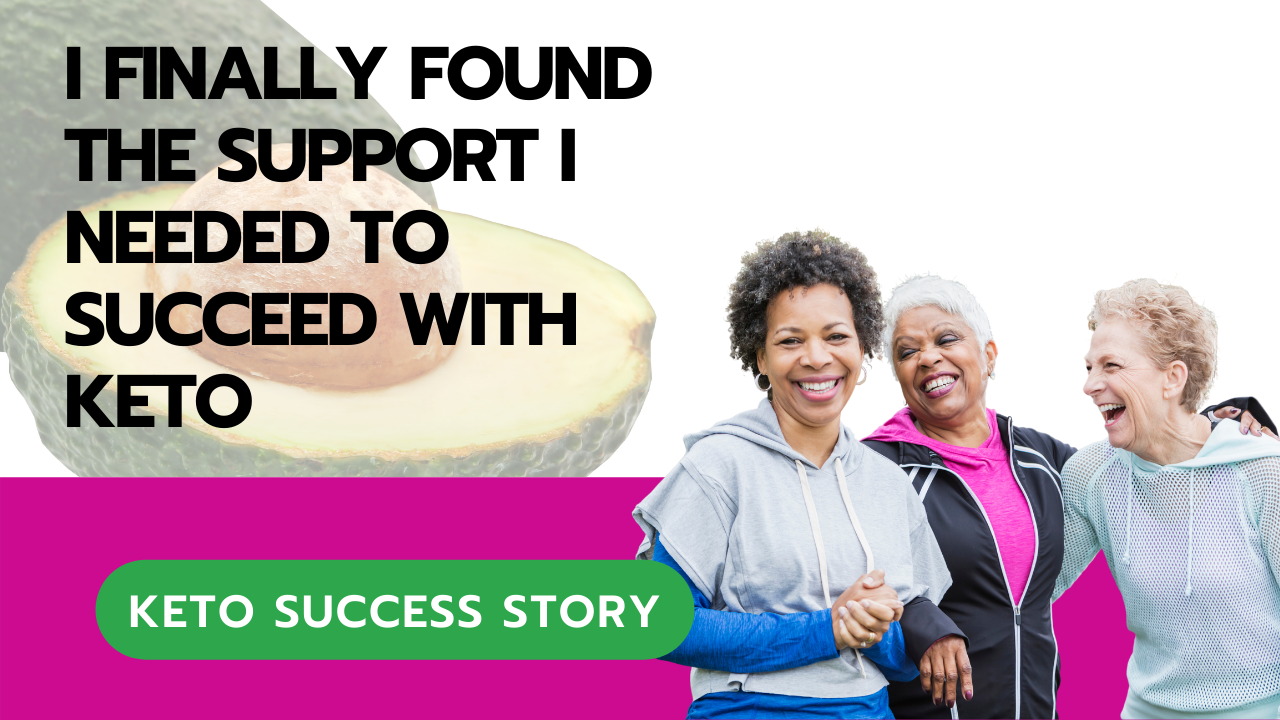 I Finally Found the Support to Succeed With Keto.

After trying every diet under the sun– All the diets! From HCG to Jenny Craig, and Atkins–Kim just couldn’t believe how different this was.

Kim is a 55-year-old lady that lives on the East Coast. She’s five foot four and her starting weight was 230 lbs and she wants to lose about 75lbs.

Kim comes from a very overweight family that was not supportive of her reducing her size. Her dad had been over 300lbs at one point and her parents had really dissuaded her from doing anything active. For example, they told her, “You can’t play sports, because it’ll make you all horsey”. Basically, they just wanted her to stay like the rest of the family, which was large and inactive.

Can you identify with an unsupportive family?

Like a lot of ladies I work with, she gained weight with each of her pregnancies. She has four kids and so her weight slowly went up and up her whole life.

Six years ago, she made a commitment to God, and for Lent that for those 40 days she would eat really healthily.

But then, the holidays came, and like many, it ended up being a really stressful time and an excuse to overeat.

Her father actually sabotaged her by bringing lots of food and was angry with her for not indulging in all the foods that he brought. He asked her, “Why even try?”

Kim had her work cut out for her, coming from a family that was not in any way supportive of her trying to be healthy.

By the time Kim came to me, she was feeling desperate, frustrated, and hopeless. Like she’d never get the support to succeed with keto.

She’d had a hip replacement at 55, which is pretty young to be experiencing that kind of surgery. She already had arthritis, was pre-diabetic, and had autoimmune conditions which run in her family. She was having sleep issues, and a lack of energy as well.

Kim’s motivation was that she really just wanted to get healthier so she could be physically active and go hiking. She wanted to feel really good emotionally and spiritually.

Does this sound familiar?

Just before reaching out to me, Kim had been to see her doctor, who told her she should do keto. It was great that she had a supportive doctor for that but all that the doctor gave her were some handouts and some videos.

Trying to figure out keto on her own had Kim feeling really overwhelmed. It was hard to calculate everything and it turned out to not be a very helpful gesture from her doctor. She was not getting the support to succeed with keto.

After trying it on her own, she was experiencing a lot of issues. She found that she was having really poor sleep. She was discouraged from lack of results, which is so common. Most of my clients when they’re trying it on their own, while they do their best to get it right, they lose hope and motivation when they don’t see the results on the scale.

Has this been your experience?

On top of this, Kim needed to travel a lot to see family. So she really needed a keto program that was flexible and easy that she could do despite having a busy schedule.

So she started looking for a coach to help her figure out how to follow this in an easy-to-implement way. She wanted somebody there to hold her hand, guide her, and keep her accountable. She wanted the right kind of support to succeed with keto.

What she really wanted was a way to resolve the dilemma of “how do I get back to my past self, when I was much healthier?”

How do I get the support to succeed with keto?

Fast forward just 2 months after working with me, and Kim was pain-free from the issues with her hip and arthritis. Kim lost 15 lbs despite having a really stressful life.

During the 2-month program, a lot of stressors came up in her life and she was able to handle the distress quite well, which is also something we see with ketosis. In the brain, it increases neurotransmitters that make us feel calm and stress-tolerant.

She’s sleeping much better and has TONS of energy every single day. In fact, she’s able to get on her Peloton every day which before she didn’t even have enough mental energy to think about doing that, let alone actually get on it.

She said that the way that I teach meal planning is so easy and so fast that she doesn’t even have to think about what to eat. She found my whole approach and program were so helpful and that she had the support of friends by being a part of our community.

She added, “I absolutely love how your program is set up!”

She finally got the right support to succeed with keto.

Trying to stick to a diet plan is hard at the best of times, but when you don’t have the support of your family behind you, it can feel like Mission Impossible.

If you want to change your health and lifestyle with keto, but don’t want to do it alone, then contact Carole today. You deserve the right kind of support to succeed with keto!

Other Success Stories You May Enjoy

How to Stick with Keto When You’ve Failed Everything Else