Too old to lose weight? I’m 20lbs down and counting! 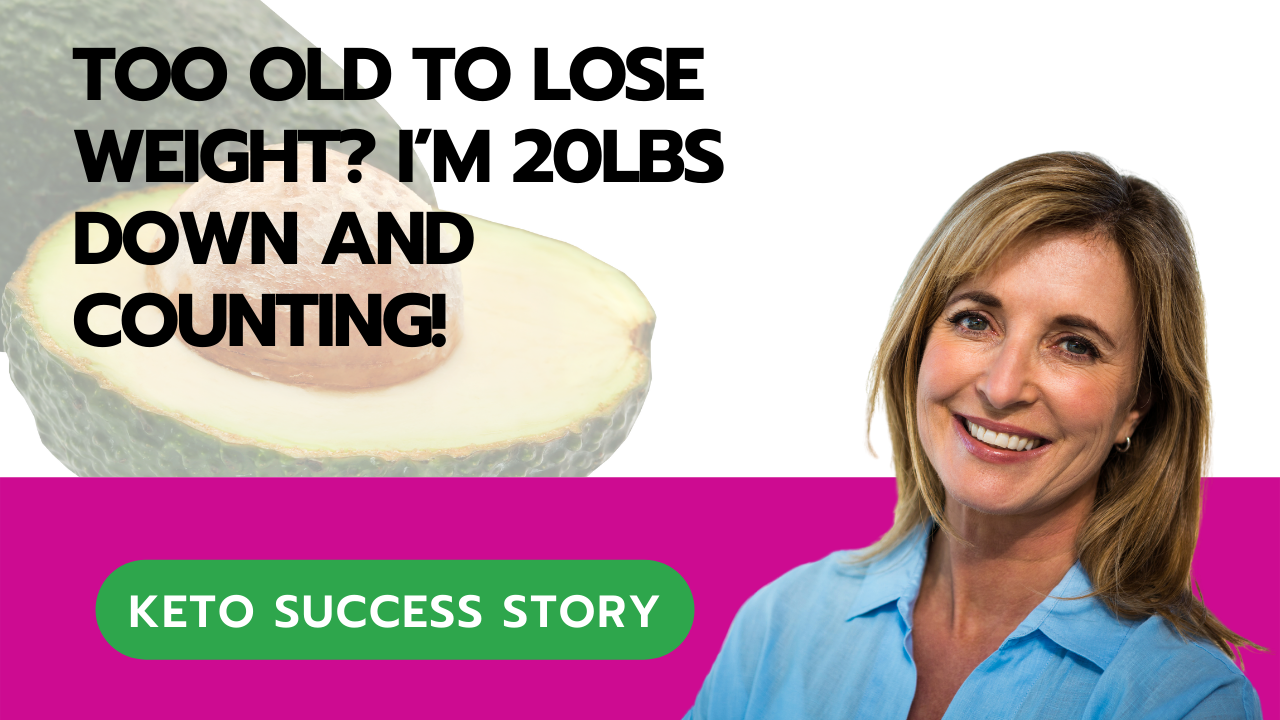 She was almost up to 190lbs, having put on a lot of weight over the years, especially around her tummy. She desperately wanted to lose the weight.

But she was told by doctors that at her age, losing weight was going to be EXTREMELY HARD.

They said she should just get comfortable as it was just natural that her middle be a lot bigger than it was when she was younger.

Instead of being a motivation killer, their words only spurred Ann Marie on.

She had tried everything in the past.

She tried counting calories, the point system, she even tried programs that required gulping down protein powders. But not only were they really expensive, she couldn’t tolerate them as they made her really nauseous.

Every new diet she tried, she could barely lose 5lbs.

She was starting to lose hope.

That’s when she reached out to me for help with keto.

During our group support sessions, Ann Marie found comfort in the other members’ experiences, which were just like her own.

Seeing their keto success, really helped keep her on track.

You see, Ann Marie was tapping into the 3 diet success essentials.

Through the weekly group meetings, Ann Marie was meeting people who were successful on keto and were a rich resource of support and motivation for her.

The information training we did together also taught her how to keep the weight off, how the body tries to regain the weight, and how to make long-term behavior changes.

Having that insight was invaluable as it meant she could understand her own body and how keto works.

And with our periodic check-ins for both weight and waist measurements, Ann Marie was able to SEE her progress in action.

It also gave her a chance to explore the more subjective side of keto, what other things are improving in her life, like mood, cravings, and appetite.

“Being able to see the effects of keto beyond the scale is a HUGE motivator.”

With those 3 things present in her keto diet plan, Ann Marie was able to prove those doctors wrong!

After 2 months of working with me, all her clothes are fitting better. She says it’s like going shopping in her own closet, putting on clothes that haven’t fit her in 6 or 7 years.

“Being able to button up those jackets from the past was like a real badge of honor!”

Not only is she able to wear things that haven’t fit for years but she’s also gone shopping for a pair of jeans for the first time in as long as she can remember. AND buying them in a much much smaller size.

Other surprising things for her were little things like jewlery on her neck looks prettier due to less fat around her neck, her shoes fit better, her hands are less puffy and the bingo wings on her arms have shrunk.

As well as all of those amazing results, the reduction in her waist measurement was phenomenal…“I can’t believe I lost 6-7 inches just on my waist alone!”

She’s also noticed improvements in her sleep and her skin. That was one of the things I personally noticed when I met with Ann Marie for her graduation video call.

Her skin just looks more radiant and she had this certain sense of calm and peace on her face that wasn’t there before.

I mentioned this to Ann Marie and she laughed, adding her friend has also commented “You are so upbeat! I want whatever drug you are on!”

Her moods have certainly improved and Ann Marie has also noticed a difference in how she is able to handle stress. She feels so much calmer and more peaceful during times of stress.

Ann Marie experienced another unexpected benefit of her keto program…

Since she is the primary cook in her house, cooking delicious keto meals resulted in her husband also losing a lot of weight, even though he wasn’t following the program.

Ann Marie went on to describe her biggest aha moment of our working together.

Before starting the keto program she thought that she could just reduce some food groups instead of cutting them out completely.

She thought she could reduce the potatoes or reduce the amount of bread she ate and still be in control. But what she found was that actually completely eliminating those foods makes it SO much easier.

A lot of people have the mistaken idea that when you cut foods out or restrict yourself that’s what causes you to feel deprived.

The cravings for those foods completely goes away when you’re no longer eating them. As Ann Marie found out, eating none of those foods works so much better than trying to keep a little bit of them in your diet.

So what happens now for Ann Marie?

She said it’s a no-brainer…

After my starter 2 month program she’ll be staying on for continued support with the long-term membership.

She knows that that’s going to give her those three things that people need for long-term success— constant contact with the community, ongoing education, and periodic check-ins.

“I’m not at my goal weight yet, so I definitely want to maintain the results I’ve already achieved but I also want to get to my goal and then keep that weight off.”

Ann Marie has got this figured out.

Get in touch and I can help you do just that.